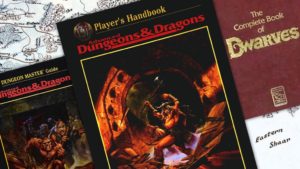 I came of age playing AD&D 2nd Edition, – specifically that very rules-lax variety that only junior highers can manage. Over time this naturally evolved into 3/3.5, 4th Edition, and Pathfinder before going further afield into narrative-focused games like Fate Core, the plethora of Powered by the Apocalypse system games, and others.

This dates all the way back to those heady AD&D days when, one summer, my best friend Chris and I made our own game. It was a riff off Mega-Man (and for all the world, I wish I still had those rules and drawings put down on graph paper).

Over the years I’ve piddled away on various RPG and miniatures wargame rules for my own amusement, but haven’t done much consistent playing in five years. Yet in this season of COVID-19, I’m finding the itch of the old roleplaying experience coming back.

But my interests have evolved.

Over the past several years, I’ve become fascinated with the history of sixteenth and seventeenth century Europe (i.e. the Northern Renaissance or early modern period), and in particular the Low Countries which would become modern-day Belgium, the Netherlands, Luxembourg, and parts of northern France.

I didn’t think playing in the historical context I am so interested and immersed in was possible.

But oh how wrong I was.

In exploring the OSR scene over the past few months, I’ve made a few encouraging discoveries that have opened my eyes to the possibilities for tabletop roleplaying in historical settings – with rules supporting that design choice:

It is as if the scales have fallen from my eyes, and now I’m moving forward with my own ambitions for a historic setting and rules set.
While I really do love the PbtA scene and the innovative narrative games, in my personal context, people play D&D. They are familiar and comfortable with those mechanics, which is a perfectly valid choice. I like them, too!
To that end I’ve started work on my own attempt to place the d20 framework and OSR-inspired mechanics (along with my own mish-mash of house rules) into a package appropriate for Late Renaissance Europe. I’ve no plans on marketing or Kickstarting these rules, so I’m going with an appropriately cheeky, non-branded name: the 1500s Hack.
Derivative, I know; it’s by design!
I’ll welcome your feedback as I post my progress and design dilemmas on this blog.